Research has suggested Melanotan 1 nasal spray helps in treating erythropoietic protoporphyria, a form of porphyria; it can be very painful and varies in severity. It usually arises from a deficiency in ferrochelatase (an enzyme encoded by the FECH gene), which leads to abnormally high protoporphyrin levels in the liver, skin, plasma and red blood cells (erythrocytes). The severity varies from one person to the other.

One to twenty minutes after exposure to the sun, patients will start experiencing burning pain on their exposed skin, especially hands and face, then followed by redness and swelling that will last for several days. Usually, the fear of this pain has a major effect on the quality of life, including recreational and work opportunities. This peptide has been shown to reduce phototoxic reactions plus recovery time in people suffering from erythropoietic protoporphyria.

Research has suggested Melanotan 1 is also beneficial to people suffering from Hailey-Hailey disease (familial benign pemphigus), a genetic disorder that normally causes blisters to start forming on the skin and also over large areas of your body. These painful blisters break and at times become raw and infected, with new blisters starting to form over your raw skin in a seemingly continuous cycle of outbreaks. Melanotan 1 was prescribed to two people suffering from this disorder and resulted in remission.

Vitiligo is a skin condition characterised by white patches that appear on the skin as a result of selective loss of epidermal melanocytes. The patches of your skin that are affected usually have sharp margins and the hair from the skin can also become white. UVB phototherapy is the foundation of vitiligo management, but research has suggested repigmentation has been proven to be quick and superior when UVB phototherapy is used together with Melanotan 1.

Solar urticaria (SU) is a rare type of inducible urticaria or chronic physical characterised by a flare, weal and itch within minutes of exposure to sunlight. The action spectrum is variable, but usually involves visible light and long-wavelength UVA. Studies have revealed that the use of Melanotan 1 Europe reduces the formation of weal secondary to increased melanisation.

Alzheimer’s disease:
Transgenic mice’s brains are protected from cognitive decline and the onset of Alzheimer’s disease by MT-1 administration (AD). Melanotan 1 has been shown to reduce neuronal apoptosis and amyloid-beta plaques in mice with mild Alzheimer’s disease with even trace amounts of the peptide. This improves the MT-1 treated animals’ clinically defined cognitive function and synaptic transmission. In the same study, all of the peptide’s beneficial effects were prevented by inhibiting MT-1’s effects at the MC4 receptor.
When MC4 receptors are stimulated in AD mouse models, neurogenesis and cognitive function are restored. Furthermore, even at a single daily dose, the peptide significantly lowers all AD-related biomarkers. Consequently, multiple mechanisms of action are employed by the drug.

Neuronal feeder cells known as astrocytes help to protect and nourish neurons by expressing only one melanocortin receptor, MC4.

Neurotrophin (BDNF) production is boosted by MT-1, which in turn stimulates astrocyte activity. In addition, the stability of synapses and general neurogenesis are both dependent on BDNF.

Stroke:
MT-1 also helps to alleviate the adverse effects of stroke. The peptide can help control brain damage and neuronal death and improve learning and memory if used even 9 hours after a stroke. It helps reroute learning and memory to healthy parts of the brain by activating MT1. As a result, it aids in the restoration of synaptic plasticity and long-term brain function. The Zif268 gene’s expression is a critical mediator in this process. Melanotan-1 causes Zif268 to be overexpressed in animals. When overexpressed in AD models, it appears to improve cognition.

Neuro diseases:
Inflammation of the central nervous system in mice was recently linked to the MC1 receptor. Multiple sclerosis is characterized by the destruction of neurons’ myelin sheaths by T helper cells. The use of MT-1 can effectively reverse the damage. Indeed, the administration of MT-1 to these mice improved myelin repair and increased neuronal signalling.
Another inflammatory eye disease, uveitis, causes discomfort and can impair vision. As a substitute for steroids and other immunosuppressive drugs, Melanotan 1 is a viable option. As an alpha-MSH mimic, the peptide works by blocking the MC4 receptors on T cells. To avoid the adverse effects of systemic application, local administration of MC4 agonists has also proven effective.

Blood circulation and heart:
Melanocortins, such as MT-1, have reduced cardiac injury and improved circulatory parameters in animal studies. It is possible to restore arterial pressure and heart rate to baseline levels, reverse metabolic acidosis, suppress inflammatory markers, and promote the expression of genes associated with cardiac function by administering MT-1 during CPR and in combination with epinephrine. In addition, Melanotan-1 or a similar melanocortin was found to be effective in treating cardiac emergencies, as evidenced by the study’s significant increase in overall survival rates.

Fat-loss:
Like several other melanocortin receptors, MT-1 also acts on the MC5 receptor. Fat storage becomes fat burning when MC5R is activated by muscle cells, and this interaction occurs. Lipid metabolism is a multi-step process, as demonstrated by these studies in murine models. Therefore, it is possible to alter one’s physiological state without engaging in physical activity by using MT-1, a useful molecule for studying fatty acid metabolism. Individuals who cannot exercise due to injury, morbid obesity, or disability may find this helpful. Unfortunately, it is currently only available for academic and research purposes and not for human use.

Tanning injections raise the most red flags because of the potential for unrestricted use. In addition, product labelling cannot be guaranteed in the absence of adequate and proper regulatory oversight. Melanotan’s long-term effects, on the other hand, remain largely a mystery.

Melanotan I’s most common side effects, which are generally considered to be temporary, include: 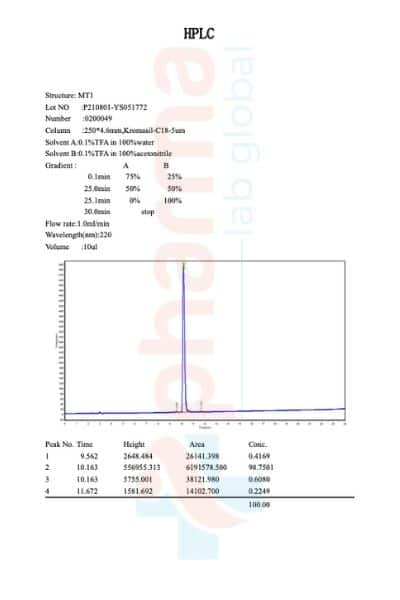 If you are looking for the highest quality Melanotan 1 peptide with 99% purity for medical research purposes, Europe Direct SARMs site is one of the best places to get them. Direct Sarms is a reputable company dealing with performance enhancers. They provide Peptides obtained from quality labs and fast shipping to different parts of Europe.

DISCLAIMER: YOU MUST BE OVER 21 YEARS AND BE A HEALTH CARE PROFESSIONAL to BUY THIS PRODUCT. All of the products are to be handled only by appropriately trained and qualified LABORATORY or RESEARCH professionals. Products ARE ONLY used in the process of medical research by responsible individuals. Europe Direct Sarms does not encourage or promote the use of any of these products in a personal capacity (i.e. human consumption), nor are the products intended to be used as a drug, stimulant or for use in any food products.